Penny have lost six relatives to cancer. Both sides of my family have suffered very cruelly and I now volunteer and blog to raise awareness and make a small difference in the fight against this terrible disease. 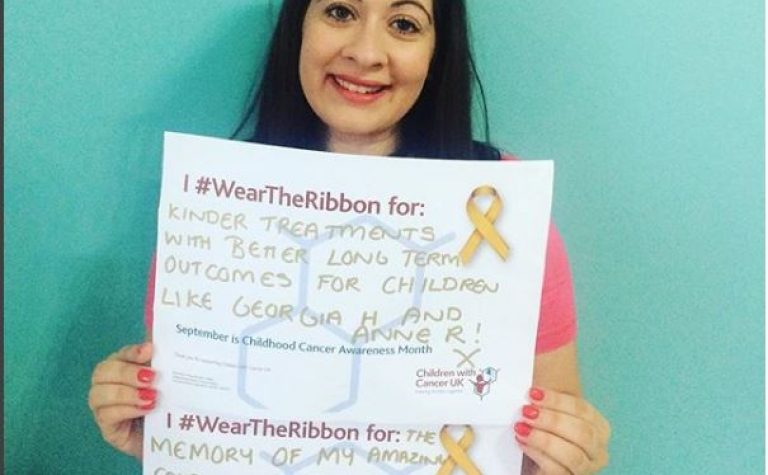 On this day (25th April) six years ago I woke up on my 22nd birthday and was opening my presents when my mum called me to tell me my beautiful cousin Georgie had passed away a few hours before. Just like that this day had changed into the most bittersweet day of the year for me – the day I celebrate getting another year older is now also the day we mark another year without the heartbeat of our family. I spent the rest of that horrible day in a daze and geared myself up for something that had been inevitable for some time – life without Georgie. Today I think the best way to honour my cousin is to try and raise awareness with his story.

George lost his mum to cancer when he was fourteen months old. A few months later he was diagnosed with cancer on his second birthday. I remember the day like it was yesterday, I was sat by the stairs with my little sister whilst everyone was screaming and crying around us. It is one of my earliest memories as I was only five at the time.

At one point during his first cancer battle he was given a 5% chance of survival but he somehow managed to beat it and went on to become an active, loving and healthy young boy. The fact that his mum had died mere months before his diagnosis had been brushed off as an unfortunate coincidence by doctors at this point.

When he was fourteen Georgie was diagnosed with cancer once again. This was dealt with swiftly but a week later he began to feel a tingling in his chin and his jaw started to swell. He was shunted from medical department to medical department – dentists said it wasn’t a teeth issue and the oncologists said it wasn’t cancer. Georgie and his brother were taken to Cyprus by our grandparents that summer. We are of Greek Cypriot origin and the boys had a brilliant time in our homeland but Georgie still had this persistent tingling and pressure in his jaw.

In September 2008 Georgie was diagnosed with osteosarcoma in his jaw. I came home from work and my mum told me the news. For those few minutes whilst my mum explained the situation to me it felt like the world around me was on fast forward and I was rooted to the spot. I had already watched him fight for his life as a baby – and in between that lost four other relatives to the disease – and here I was again, nineteen years old and gearing myself up to support my cousin through his next battle.

The next few years were filled with hospitals. My family was geared about Georgie. I would finish work and go to see him wherever possible. During Georgie’s illness I also had my paternal grandfather diagnosed with cancer and he died in January 2010. I was now at five relatives lost to this horrific disease and I still had one fighting for his life. It seemed life was engulfed by this illness and we couldn’t escape its grasp.

My uncle raised questions about Georgie being diagnosed again and he was eventually submitted for genetic testing. He was diagnosed with Li Fraumeni Syndrome, most likely inherited from his mother. Li Fraumeni Syndrome is a mutation of the TP53 gene. This gene functions as a tumour suppressor but Georgie’s body was missing one of the key processes for preventing damaged cells from becoming cancer. This meant his risk of developing cancer was incredibly high and even if he managed to survive the cancer he had, there was a high risk of him developing another. This information came too little too late for Georgie as it had taken three months for him to be diagnosed with his cancer – had we have known about this mutation my uncle would have been taken far more seriously when taking Georgie for appointments.

Georgie had a real zest for life. He was funny, he was adventurous, he was the life and soul. He fought for his life with immense bravery. He had so many operations, rounds of chemo and other types of treatments but most of the time he tried to put a positive spin on things. He had treatment in China and Germany as well as here at home. Everything was done to try and save him.

He returned from treatment in China in late 2010 but after his experience there he was never really the same Georgie again. He was bedbound most of the time and his positivity slowly started to drain from him. In those last few months I would go to visit him and sit on the floor next to his bed as sitting on his bed we would rock it and make him feel sick. I used to watch Carry On films with him at this point. I watch them now when I miss him as a comfort.

I didn’t get that final visit

On the Thursday before the Easter weekend I finished work in Harley Street and called my Uncle to see if I could come over. He told me Georgie was sleeping and to go after the weekend. Georgie died on the Monday and I didn’t get that final visit. On April 25th 2011, at 3.47am, Georgie passed away at the age of seventeen.

I had already experienced loss and grief five times by the time Georgie died but his death was on a whole new level. Even now, six years later, the grief hits me like a train and I find myself overwhelmed with a desperate feeling of wanting to speak to him, to see him and to hear him talk or laugh. Sometimes I can’t do anything but sit and cry for the boy we miss so much.

In the six years since Georgie died, life has moved on but he still remains very much a part of my life. I have been volunteering with cancer charities for almost seven years and this provides me with comfort. I have an overwhelming desire to help others and to share George’s story. To try and help people the way I couldn’t help Georgie. Georgie’s school remember him too in various ways. His friends still post on his Facebook on his birthday. His dad is doing incredible, researching Li Fraumeni Syndrome and raising awareness of it. It is comforting to know that he is still talked about and still loved. He is still having an impact on the world and he will continue to do so for years to come.

This article was reproduced by with permission from author [Penny] and was originally published at: forgeorgiep 13.09.18