For no apparent reason, four-year-old child Jacob started limping and his legs began hurting. He was eventually diagnosed with leukaemia. Over three years on, mum Louise tells their story: 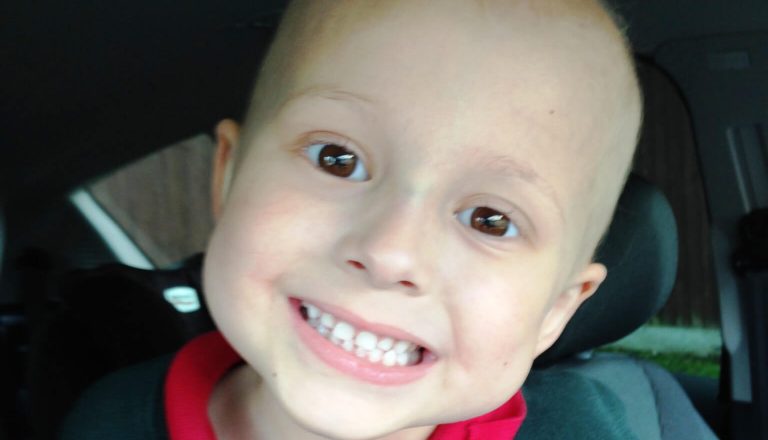 Jacob was just four years old when one day he started limping and saying his legs hurt. Thinking he’d probably hurt his leg at football club, I left it a week or so before taking him to the doctor.

Three doctors before a blood test

Hopefully in the future there will be quicker diagnoses of childhood leukaemias. The first doctor said it was growing pains. I didn’t believe this since growing pains are worse at night and don’t cause a limp.

Two days later and the second doctor said ‘it was nothing serious’. A week later we saw a third doctor who finally ordered a blood test to take place three days later. Bloods were done on the Friday and I was called on the Monday to urgently come to the doctor’s.

His blood results were abnormal and we were sent to A&E for more blood tests. Eventually we were taken aside and given the news he had acute lymphoblastic leukaemia. It was heart-breaking to see him sat playing happily on the bed like there was nothing wrong with him at all.

Transferred to hospital for treatment

We were transferred to a specialist hospital and stayed for nearly two weeks. The first stage of treatment was tough and the steroids made him depressed and not want to do anything. He didn’t smile for weeks and it was really hard to see your child become a zombie. His muscles became weak and he had to learn to walk again. 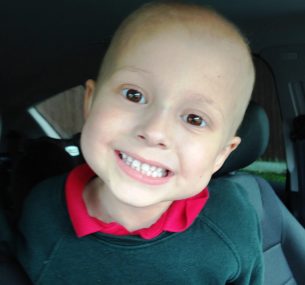 It was months before he could walk properly again. He still went to school part-time, even when he wasn’t feeling too good because of the chemo. After eight months of intensive treatment, and a lot of ups and downs, he started maintenance chemotherapy treatment. 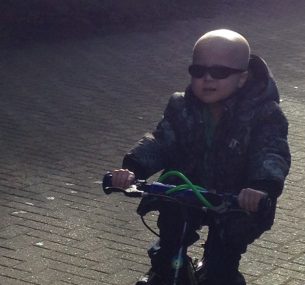 This is to stop the leukaemia coming back. It lasted two and a half years. He got back to a relatively normal life, going to school full-time. And we were allowed to go on holiday. He had four hospital visits every 12 weeks, and weekly blood tests. 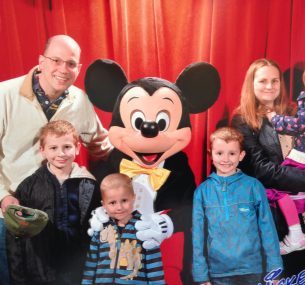 He finally finished treatment in October 2015. We have now lost the chemotherapy safety net. We have to hope his body can recover and the leukaemia won’t come back. He has been amazing throughout and is doing really well at school. I am very proud of both him and his three siblings who have also been through a lot over the last three and a half years. 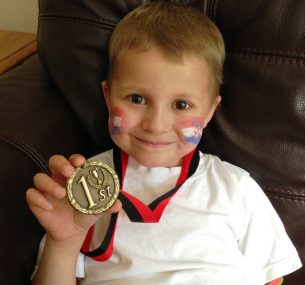 I would like to hope that our experience of not being taken seriously by the doctors won’t happen again. But it is all too common. Doctors need to be aware of all the symptoms of leukaemia, such as limping, like Jacob had, not just infections and bruising which Jacob didn’t have. Hopefully in the future there will be quicker diagnoses of childhood leukaemias! 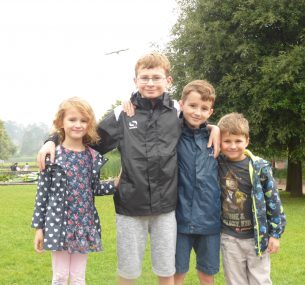 Jacob is now 16 months off treatment and has check-ups every three months. He is currently very healthy and the chance of relapse decreases all the time, but the worry is always there. Jacob is still doing really well at school and taking part in lots of football and hockey matches, and recently did a school cross-country race.

His physical strength has taken a long time to return but he does seem like any other ‘normal’ child now. He still talks about his treatment but really just wants to be like all his friends. We feel very lucky that he has got through his treatment without any major long term effects so far. Jacob (left) seen here with his brother, went to his first Chelsea football match towards the end of January, so he was very excited. 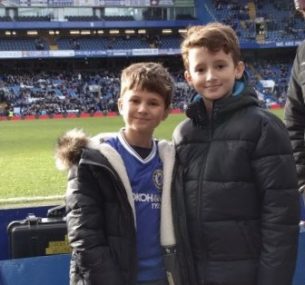 Jacob continues to go from strength to strength. He passed his 11+ in January and is looking forward to starting his new secondary school in September. We are very proud of what he has achieved after missing so much school. At sports day, it is apparent how much he improves with his speed and endurance every year. He had to learn to walk again after induction at the start of his treatment, so hopefully it will give hope to all those in the same situation. He has discovered a love of golf, and he likes to play Fortnite of course! He is just like every other 11 year old boy now. 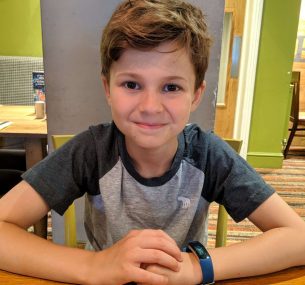 Jacob is now 13 years old and we celebrated five years since end of treatment in October 2021. This is a big milestone as, in theory, he is no more at risk of getting acute lymphoblastic leukaemia than any other child, and he is now in the late effects clinic at hospital. He will next have a check-up in two years which does seem a long time, but is good news as his risks are so low. If he has any issues, the clinic can see him sooner, which is reassuring.

Jacob caught COVID-19 in March 2020 from school, just as schools closed for the first time, which he then spread to the rest of the family. We were initially worried with how his immune system would handle this virus but he was fine after a week. He is doing well at school, despite the home schooling, and is about to choose his GCSE options. He is not really sure what he wants to do so is choosing a broad range of subjects he enjoys. He plays a lot of golf outside of school, and as much tennis as he can in school. He is also doing his Duke of Edinburgh Bronze Award and will be going on his first overnight expedition in March 2022.

We had a lovely Christmas seeing family that we had not seen for two years and feeling positive about life getting back to normal again. It was also lovely for him to go to a Chelsea match in January, something he has not done in a long time due to the pandemic. He was very fortunate to be gifted hospitality tickets through Children with Cancer UK thanks to one of their amazing supporters. He had a meal and even met some Chelsea legends. It helped that Chelsea won on the day. 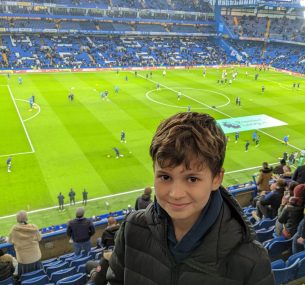 Thank you for giving me and my dad the tickets for Chelsea v Tottenham. Chelsea won so it was a good day and we got to meet two old Chelsea players in the restaurant. The seats were really good and it was a really fun day as I haven’t seen a football match for a long time. So it was great to be able to see my favourite team, and my dad really enjoyed it too. 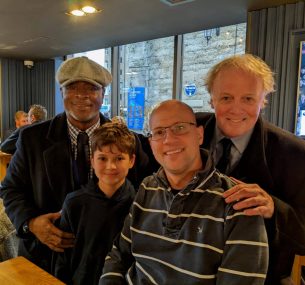 If you’ve been touched by Jacob’s journey, help us invest in the high quality research that really matters which would otherwise go unfunded. 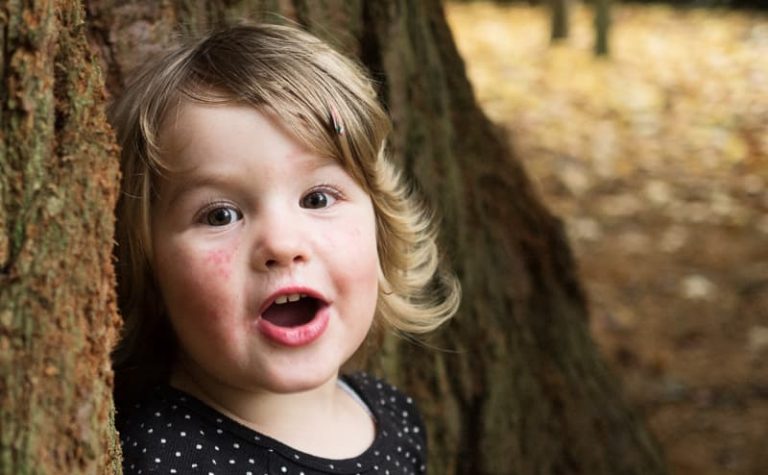 Izzy was diagnosed with acute lymphoblastic leukaemia in 2017 just before her second birthday.  Her dad Dave shares their 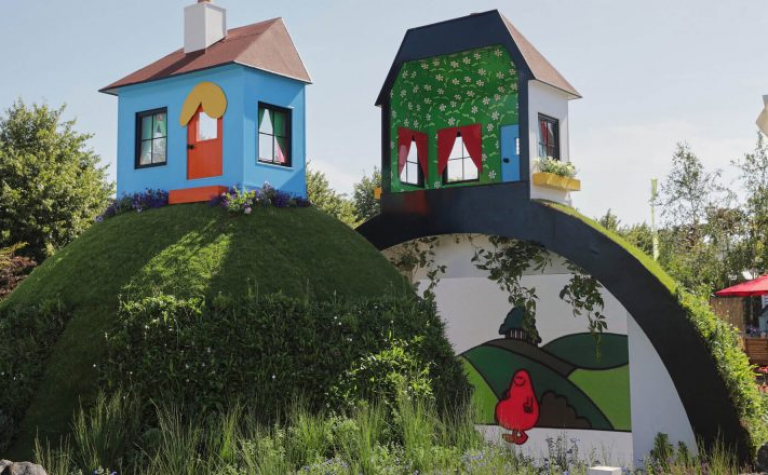 Children with Cancer UK is delighted to announce an exciting new collaboration with Mr. Men Little Miss, hosting a show-stopping 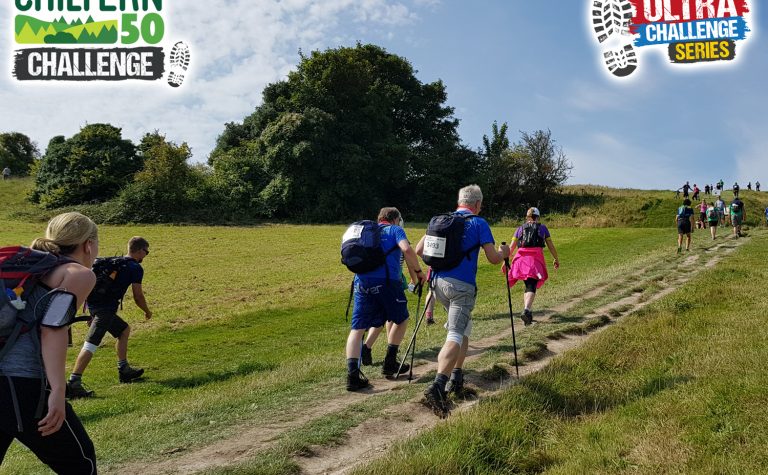