Felix was diagnosed with acute lymphoblastic leukaemia (ALL) on 26 January 2016. He was just 10 years old at the time. We are a regular family; a husband, wife, three kids and a dog. We have dreams, hopes and ambition. We used to think we took nothing for granted. We used to think that we appreciated the small things. We used to think we had it tough at times. Little did we know what was around the corner that would challenge all of the above. His mum, Kerry, tells their story so far.

Support children like Felix in their fight against cancer. 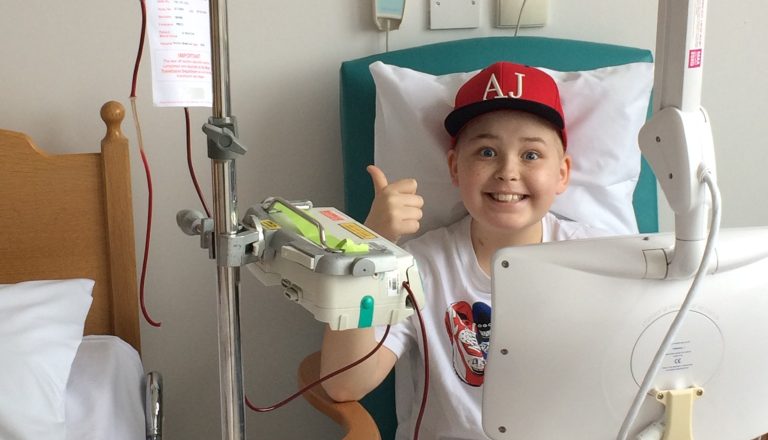 Now, at 15 years old, Felix reflects on what’s important in life, his dreams and what life can be like after having survived childhood cancer.

He was only 10 years old

Felix was diagnosed with Acute Lymphoblastic Leukaemia on January 26 2016. Our middle child was 10 years old at the time and had just returned from a three day residential trip with the school. We guessed nothing; we didn’t see it coming at all. There had been a few clues: tiredness, moodiness, odd infections, pains in his legs but we put them all down to it being winter and his hormones.

Following a rather unusual infection, Google had led me to a possible cause which our GP agreed to do a routine blood test to rule out. It most definitely ruled it out, replacing instead with a cancer diagnosis.

Those early months are tough to think about now. We were all shell-shocked, numb almost paralysed. We were immediately thrown into a whole new world of oncology; portacaths, steroid treatment, chemotherapy, side effects, sickness, weight gain, personality change and stays in hospital. Our son was hurting both physically, emotionally and his brother and sister were hurting watching him suffer whilst the adults around struggled to manage their emotions. Friends and family far and wide were hurting, wanting to help, unsure what to do; the ripple effect was huge. 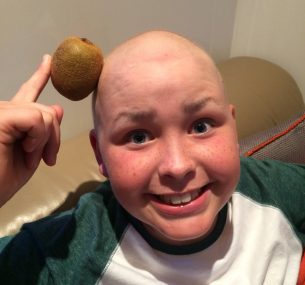 Getting used to treatment

As the months went on this whole new world became more familiar. New routines evolved where the children were not so alarmed if a different person came to collect them from school or their nanny and pops were looking after them because mum and dad were in hospital with Felix.

Felix became used to the lumbar punctures, the IV chemo that made him sick, the weakness in his legs and his hair falling out. Then came the horrific mouth ulcers, the long hospitals stays due to infection and the steroid rages.

Felix’s treatment for ALL will last three years and three months. In this time he will start secondary school and become a teenager with ALL riding on his shoulder. England may well even win the World Cup! Who knows what else will happen.

What we do know is that having a child with cancer can happen to anyone. It has changed our dreams, hopes and ambitions. We now appreciate the small things and better understand what tough times are. We are now looking forward to the future and relishing the small things; meal times together, all three kids being at school, us being at work because a year ago we were in a completely different world.

Every day we appreciate our friends and family who continue to love and support us through treatment. We also value the work of charities who do all they can to support families and fund research into cancer treatment for children. This is our story.

Please feel free to take a look at our Facebook pages: 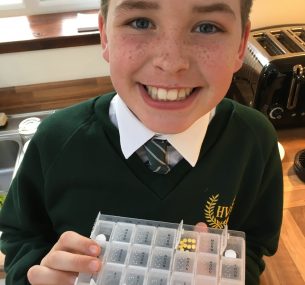 Felix is in week 109 of treatment for Acute Lymphoblastic Leukaemia. He continues to take daily chemotherapy tablets which can be up to 23 tablets in one day. Luckily, we have an amazing community team who do their very best to make sure that his weekly blood tests do not interfere too much with his education and leisure time.

Unfortunately, back in January Felix contracted Slapped Cheek Syndrome which resulted in two blood transfusions, one platelet transfusion and a hospital admission. It took him about eight weeks to recover from this and is now doing well.

When he is fit he still loves playing football for his local team Poppies and recently attended a football academy day with AFC Bournemouth. Despite the rigour of treatment, Felix continues to put 100% into everything he does with the widest smile you’ve ever seen. We are so proud of him and are so looking forward to starting the one year countdown to his treatment finishing on 26 April 2019. 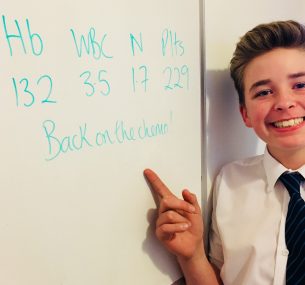 Felix finally finished treatment and rang his end of treatment bell on 26 April 2019.

We are quickly approaching Felix’s one year anniversary celebrating his end of treatment and we are proud to report that Felix is blossoming! As a sport-loving 14-year-old he is now enjoying life as he should. He loves school and is making excellent progress. He is now playing for a football development team and enjoying his first romantic relationship! We couldn’t be prouder! 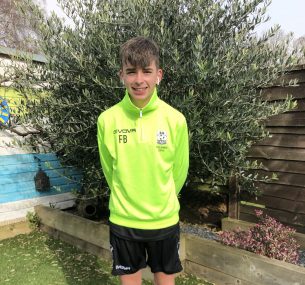 The isolation and lack of control experienced during the COVID-19 pandemic have been very similar to how life was for us when Felix was in treatment for leukaemia. This time last year we were a couple of weeks into that first lockdown and things started to feel very familiar. Again, our contact with the outside world was limited, we were terrified of a virus in the same way we were petrified of bacteria and potential infections. We became five again – existing in a bubble, fearful of this unknown threat.

Felix found early lockdown life quite difficult. Whether it brought back memories of those early days of isolation I’m not sure. He missed his friends, school and his freedom. He had been waiting for so long to enjoy all the things that teenagers should do and again, it was not to be. As the weeks went on, he got used to this new way of being and spent hours on Facetime with his friends and girlfriend. However, nothing could replace his beloved football – he missed training and playing more than anything. 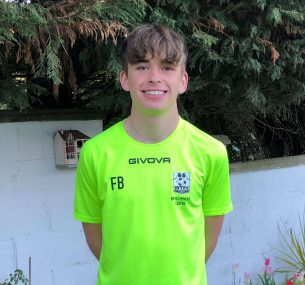 His passion continues to be football

As the restrictions changed, so did Felix. In the last year we have watched him grow into a young man. A thoughtful and caring young man who loves life. His passion continues to be in football and he dedicated hours in the rain during the recent lockdown to keeping fit and honing his skills. He dreams of playing professional football and I know he will put everything he has into realising his dream. Surprisingly, another skill he has developed during lockdown is been baking. My word, he bakes the most delicious Lemon Drizzle cake. 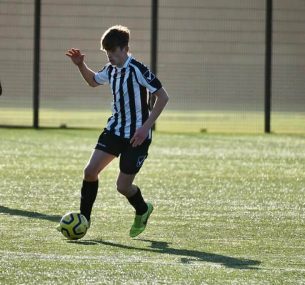 No hospital visits has helped

As Felix is maturing, he is reflecting frequently on his diagnosis and how it has shaped him. At his recent clinic appointment, he eloquently spoke to his consultant about his diagnosis and where he is now. This was in January 2021 which was his first face-to-face appointment for 12 months. During the pandemic, his appointments have been via telephone which has helped us forget his diagnosis. When we have to go to the hospital for clinics, the sights, smells and sounds are a constant reminder of when Felix was in treatment. The lack of hospital visits has helped that period become a distant memory.

Felix, like everyone, is hoping that life continues to return to some kind of normal. If anyone knows what uncertainty, constant change and different types of normal are all about, Felix does. Hopefully, the summer of 2021 will be his summer – no treatment and this time, no pandemic to clip his wings. 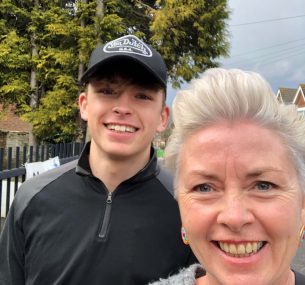 Felix is now 15 and he tells us what being a child with cancer was like for him as part of our “Treat children as children campaign“. In this video, Felix tells us what he missed during those years of treatment and what helped to get him through.

If you’ve been touched by Felix’s journey, help us invest in the high quality research that really matters which would otherwise go unfunded.

On finishing treatment, Felix and his family reflect on their journey to get to this momentous point, and question – what is next for Felix? 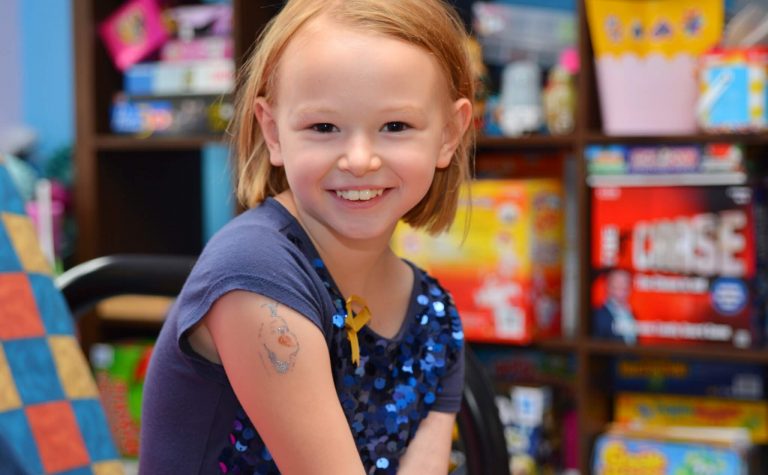 My daughter Bethan was diagnosed with primary (localised) Ewing's sarcoma in her left humerus in 2012. I like 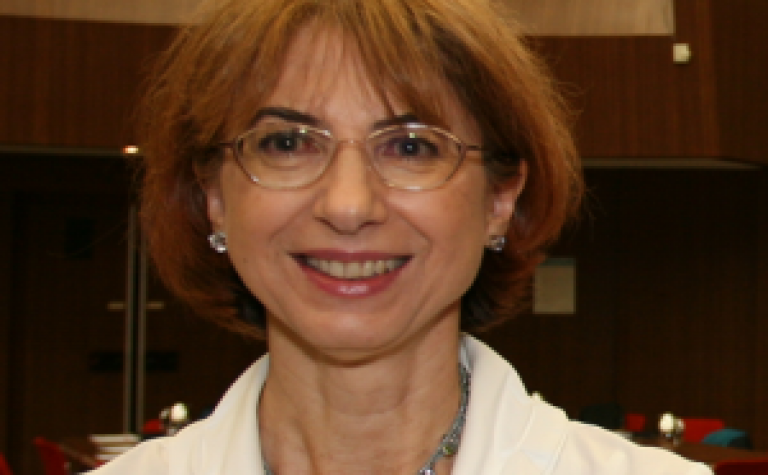 Understanding the cancer risk in childhood and adolescent cancer survivors 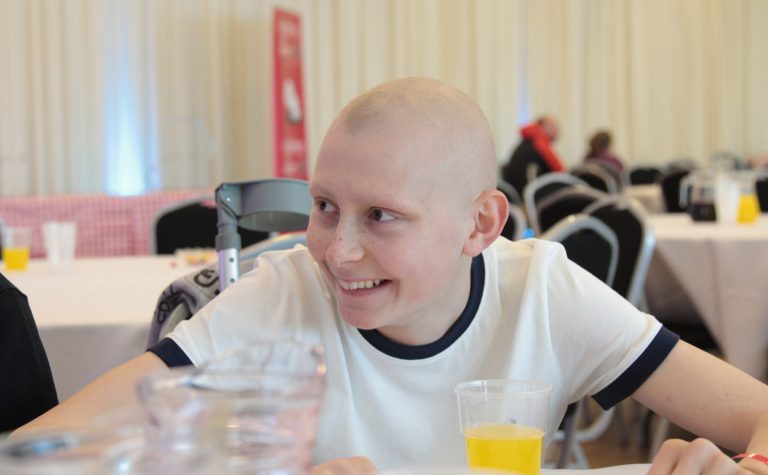