Emmy was diagnosed with medulloblastoma in 2019, at the age of 10. Tragically, Emmy did not survive her diagnosis and passed away in November 2020. Her mum, Leanne, shares their story: 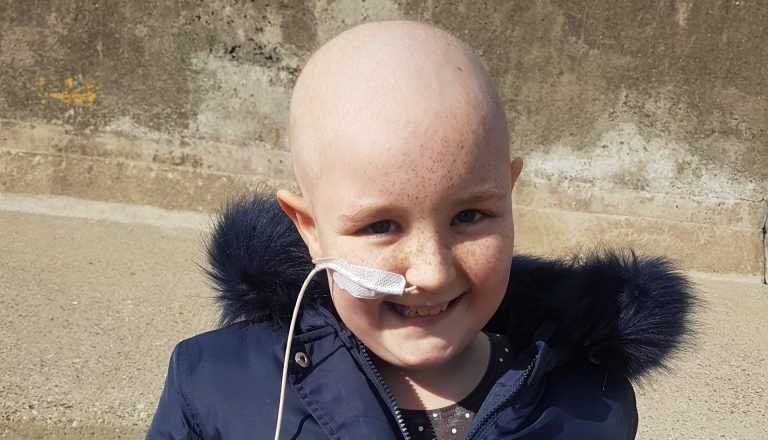 Emmy was the most outgoing, sassy, 10 year old diva. We had just celebrated her 10th birthday when Emmy started being sick. It wasn’t much and we thought it was just a little chill in her tummy. A week later she was sick again and then was so sleepy over the weekend. We thought she was just exhausted from school.

The following week we had moved house and we were starting to get the Christmas decorations out to get into the festive spirit. By the weekend, Emmy became poorly, this time experiencing pain in her neck and increased drowsiness. I called our local out of hours and made an appointment. We ended up having paramedics out to see her as she got worse, but by the time they came, she seemed to have perked up.

Following their advice, we took Emmy to the out of hours appointment. Emmy quickly went down hill and during the appointment was falling asleep on the doctor. He thought it could be suspected meningitis and sent us to another hospital. There we were observed for hours and sent home as her obs were normal and her temperature hadn’t spiked.

By the next day, Emmy went downhill rapidly and didn’t recognise her nanny when she visited and she wasn’t making any sense. We rang 999 and were on our way in the ambulance back to the hospital.

There we were seen by a consultant who sent us for a CT scan after concerns over her behaviour (she was still very confused). It was then that I was given the devastating news that there was a tumour on her brain. Even the consultant was shocked to tell me as her symptoms were unusual. We were soon on our way to the children’s hospital where we were met by a huge team of consultants and surgeons who were planning how to treat Emmy and remove the tumour. 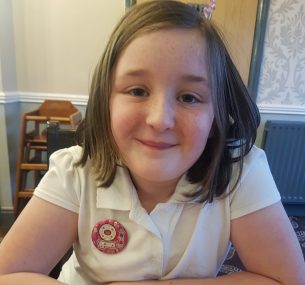 We were now dealing with an aggressive form of cancer

From the Monday to the Friday leading up to Emmy’s operation, we met so many people, ranging from occupational therapists, physiotherapists, oncology consultants, pain relief specialists – you name it, we met them all. I lost track of all names. Surgery went ahead as planned on the 6th December to remove the tumour. All fluids that had built up had started to drain naturally so Emmy didn’t need a shunt or drain. She was such a superstar and told us she felt better afterwards, refusing pain relief. By the following Tuesday, she was sitting up in bed eating a sausage and bacon bap. It made the surgery team chuckle seeing her do that.
However, our optimism was short lived as just days later, we were told that the tumour had come back as cancerous. On hearing this news, I just broke down. How on earth was I supposed to go back and tell my 10-year-old daughter that as much as she was feeling better, technically she wasn’t, and the battle was only beginning? 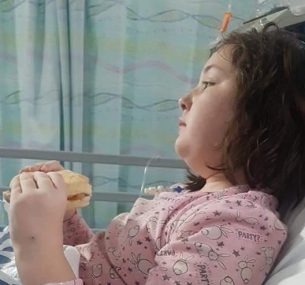 The intensive treatment that followed

Things all started happening quickly, with appointments being arranged to remove her staples, to have her radiotherapy mask fitted and tattoos (yes she has real tattoo dots) and then surgery to fit a central line in. We also made a trip to Oxford to have a procedure done for her fertility.

The day before Christmas Eve and on Christmas Eve itself, Emmy spent the day linked up to a machine to have her stem cells harvested ready for chemotherapy. It really was fascinating to watch.

With the tumour being aggressive, the treatment needed was going to be intensive and we were preparing ourselves for all side effects. The support has been amazing from day one, from the oncology team involved and her consultant.

We settled down for a few days to celebrate Christmas the best we could with Emmy and her siblings, trying not to think of cancer and what laid ahead of us. Emmy’s brother and sister have been through it with her and have been absolutely amazing and supportive of Emmy.

We had a few visitors come see her at home – Rosie Goodwin the author, RG The Baron who wrote a song for her and even Santa Claus and his elf came to visit. It was lovely making these memories for her to look back on. 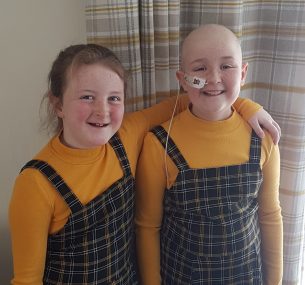 A rocky start to the new year

New year started with radiotherapy and it started off rocky. Emmy was continuously sick after the first few days, so after deciding to have an NG tube fitted to help with medications and feed, she was soon back on her feet and tackling radiotherapy like the superstar she is.

Six weeks of intensive radiotherapy took its toll though, as on the third week, Emmy lost her hair. She wasn’t fazed by it and quickly started a collection of bandanas and winter hats. She was also gifted a wig from the Princess Trust and chose a beautiful brown, long and curly wig. Her face lit up when she received it, although she often goes about without a wig on, showing the world that she isn’t fazed about being bald.

She collected so many beads of courage that glow in the dark for radiotherapy, she couldn’t wait to pick one after each session. She went in and lay there awake every session listening to music. I often heard Ed Sheeran, Calum Scott and Alessia Cara blasting out from the room she was in.

We managed to get away for a week at the end of February down to Bournemouth just the five of us. Having quality time together made everything seem so worth it and more manageable and gave us the boost we needed ahead of chemo. We have amazing friends who helped with this. Our family and friends have all been amazing helping us from day one when we found out the diagnosis. 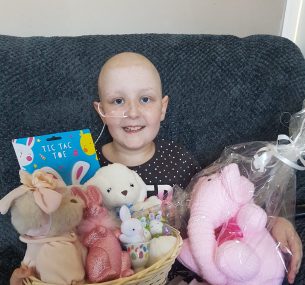 Through all the chaos, taking one day at a time

Emmy began chemotherapy at the end of March and let’s just say that the first three cycles have not gone smoothly. She has certainly kept everyone on their toes with all her temperature spikes, time spent in isolation and being tested for Covid-19 so many times, that she could probably swab herself now!

We even had a trip not so long ago to intensive care as she had a problem keeping her blood pressure stable. That was the scariest day of my life. Being alone with her in the midst of the pandemic has been so hard, as both parents are not allowed to be there. Emmy’s dad and I have struggled through, taking it in turns to be with her and to be at home with her siblings.

We are still on the chemotherapy journey and our emotions have been all over the place. I have lost track of where we are, what day we are on, even the date. The last date I can properly remember is the last day in November. Since then it’s just been a crazy roller-coaster ride. I’ve learnt to take things one day at a time with Emmy, because anything can happen in such a short amount of time. Emmy most certainly does anyway. 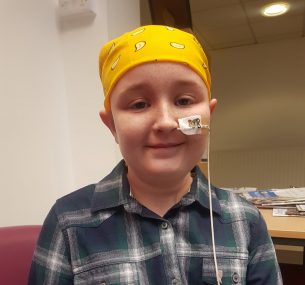 We grieve for our amazing, brave, warrior princess

Emmy completed her treatment back in July after her counts took a while coming back up from the last lot of chemo. Her end of treatment scan came around and on the 29 September we were told that everything was good and Emmy rang the end of treatment bell. It was an amazing time watching her ring the bell with her consultant and nurses surrounding her. They were amazing getting her through all her treatment this year.

We had settled in to what we would call the new ‘norm’ with Emmy starting back at school beginning of November just before her birthday. We had a couple of weeks where Emmy was unsettled with pain in her legs but we were reassured by the team at hospital and monitored how she went. On Emmy’s birthday we unfortunately ended up going to hospital in an ambulance after she was sick and sleepier than normal. Struggling to stand up and more pain in her legs, we had an urgent MRI done where we were told later that evening that unfortunately her cancer had returned aggressively in her brain and also her spine. We were told we had weeks left with our amazing daughter.

As parents we were devastated to hear it and tried thinking of how to make the most of that time. Unknown to us, Emmy was going to do it her way. And her way only, just like she has all year throughout her treatment. Just four days later, on Friday 20 November 2020, Emmy passed away in hospital with me and her dad by her side. It came as a shock just how fast she went, but surrounded by love from everyone, she went peacefully. We had spent the time watching her favourite Christmas film we watch every year, The Polar Express and listened to Disney songs. It couldn’t have been any more perfect.

The nurses, consultants and team she was under have all been amazing and so supportive, even more so afterwards, ensuring we are ok and letting us know that they are there if we have any questions. The compassion and care we have received has been amazing and we are so grateful for everything they all did for Emmy over the last 11 months, but more so this past week during our time in hospital.

As a family, on the whole we are grieving for an amazing, brave, warrior princess. Her smile and twinkling eyes always shone through even on the tough days. Her bravery and determination will always stick with us. We couldn’t be any more proud of Emmy than we already are. She leaves behind so many memories we will always treasure. 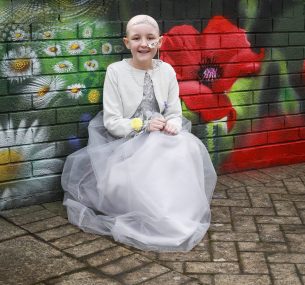 If you’ve been touched by Emmy’s journey, help us invest in the high quality research that really matters which would otherwise go unfunded.